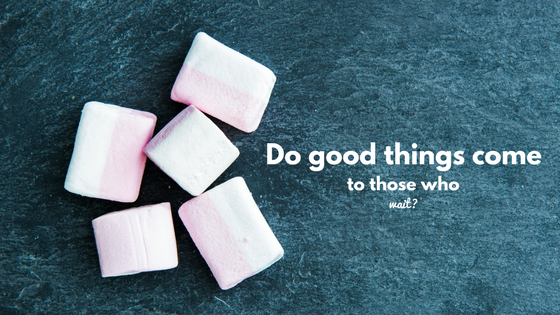 A young psychologist named Walter Mischel and his graduate students in 1960s conducted a study on delayed gratification and self control. They gave children a choice between one reward i.e. eating the marshmallow immediately, and a larger reward i.e two marshmallows for which they would have to wait for 20 minutes without eating the marshmallow. Few years later they did a follow up study and found that the children who had waited for two marshmallows performed better in their life. Although there were few criticisms to this study, the concept of delayed gratification and self control gained a lot of interest by psychologist all around the world.

Self control is part of the prefrontal cortex function and it’s interesting to note that we have control over our self control. Self control is defined as cognitive process to regulate ones thoughts emotions and behavior during temptations. In the case of marshmallow experiment the children would get double the reward just for waiting, doesn’t that sound easy, but it’s not that easy as it sounds. When faced with this situation they either focused on the marshmallows shape, texture and color or they could focus on its taste and consistency .In case of the latter it would make it difficult to control and resist oneself and our thoughts to haywire hence eating the marshmallow.

In the sports field, when we concentrate on the athletes you might notice that they try to do few breathing exercises and hence try to down regulate themselves to get calmer and focused to ace their performance. In the same way the answer to the question “what makes people to achieve their goal?” can be answered. One of the factors could undoubtedly be self control, it is noted that people who have better self control show better academic performance, have high stress tolerance, and have better ability to plan and control in stressful situation. Hence when we think about success, it is those people who focus on long term benefits that are more likely to be successful than the ones who want instant success and gratification.

In this day and age it becomes difficult to have self control, hence it is important to take small steps in cultivating it .One of the steps is to have self discipline. Self discipline helps us be productive even when we don’t feel like it, allows us to take better control of our lives. Without discipline you are letting you life be controlled by your emotions.

So how can we cultivate self discipline in order to have control over ourselves? Starting small is one of the ways, in case one wants to become healthy; it’s absurd to say that I am going to work out for 3 hours a day. Why? Doesn’t it seem the best option to keep working out every day for 2 hours and you could eat whatever you want, but what we forget to understand sometimes is that, when we are telling we could eat whatever we want, it is not good for our health, instead if we start off by telling our selves “I’m going to cut down on sugary drinks, and have more healthy drinks, and then I’m going to replace the high calorie foods with healthier options”.

Let’s give ourselves the benefit of doubt, at the end of the day we are humans and sometimes our emotions do take control over our thoughts .Hence incentivizing and rewarding oneself is  helpful .After two weeks of resisting sugary food you could reward yourself  later with a piece of dark chocolate or maybe a piece of cake. At the same time discouraging the undesirable behavior is necessary, incase you could not resist your urge you could maybe go for an extra mile of running, this is could be subjective. This is where the delayed gratification works.

Staring out with smaller steps will help create a will power to sustain oneself towards discipline , as you need self control in an out-of-control world, which will us love the whole process towards achieving our goal. So next time when you want to achieve a goal

STOP, THINK, WHAT COULD HAPPEN? , IS THAT WHAT YOU WANT?

This article is written by our Intern Asma Khader